skip to main | skip to sidebar

So the wedding finally happened! 250 cupcakes and a two tier cake later here is what my assistant (my sister for this event) and I created! 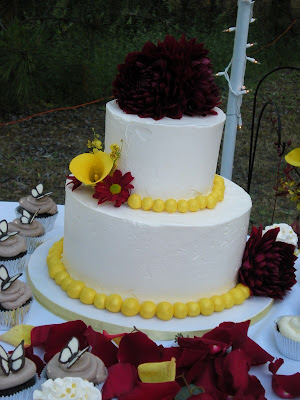 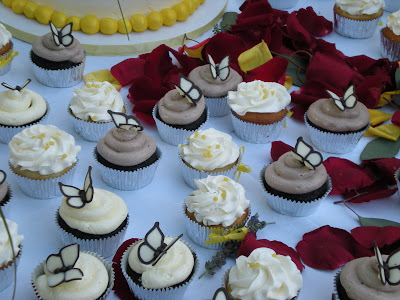 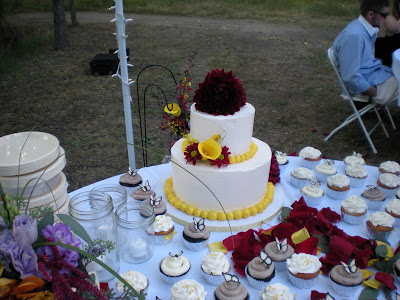 Here are some recent projects I did.

The first two pictures are practice for a wedding in Mariposa. They are vanilla cake, with buttercream. They're will also be chocolate cupcakes with ganache filling and vanilla buttercream. The wedding cake is going to be a wheat free cake with lemon mousse and blueberry compote. The butterfly is piped chocolate and the other cupcake has small yellow dragees on it 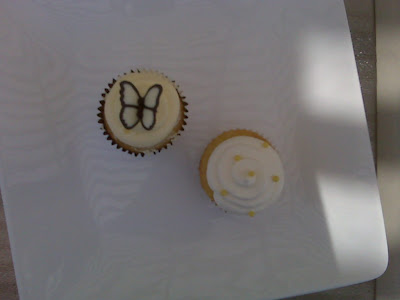 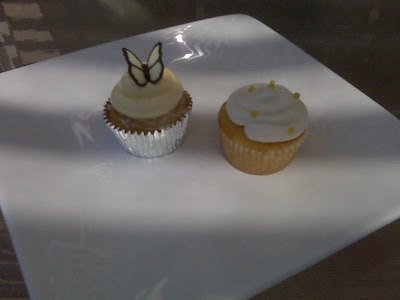 This cake was my graduation cake. Yay Sonoma State University. Using scrapbook/card making stamps I stamped diplomas and grad caps into the stars. The grad cap was made from a glass bowl as a base mold, and a cookie press to make the tassle strands. 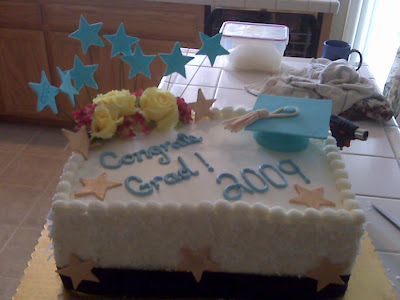 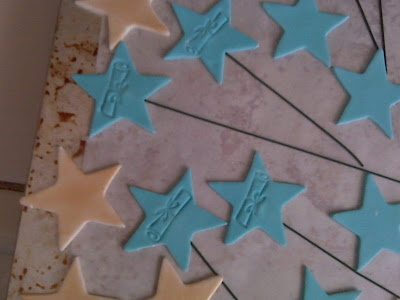 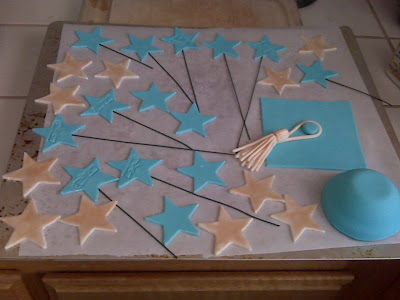 Posted by Becky and Megan at 6:47 PM No comments: 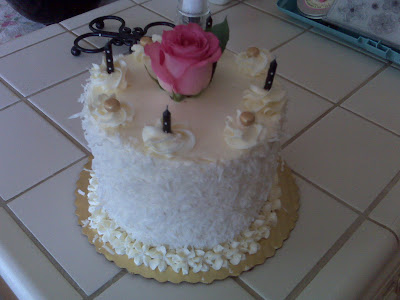 The first cake is white with lemon mousse and blueberries for the filling, and buttercream with coconut on the outside 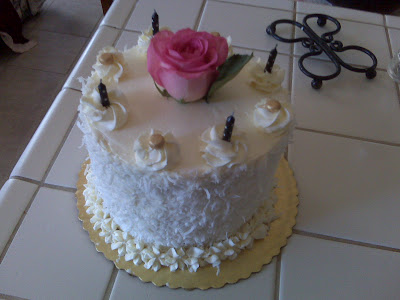 The second cake is chocolate with raspberry mousse and chocolate buttercream 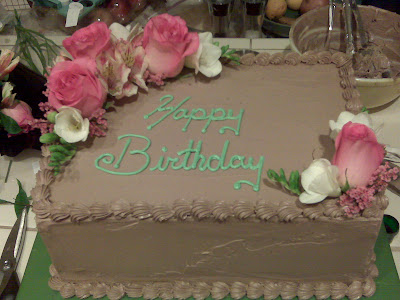 Posted by Becky and Megan at 12:48 AM No comments:

so it's been awhile...so here are all my new photos...practice cupcakes! 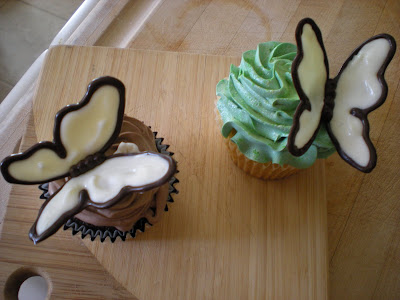 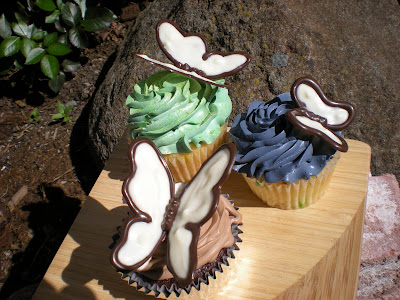 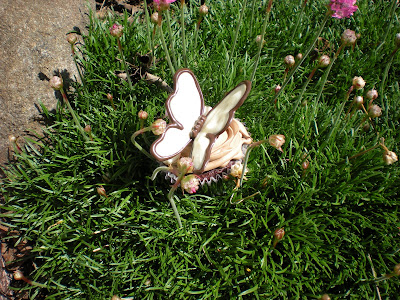 Posted by Becky and Megan at 12:28 AM No comments: 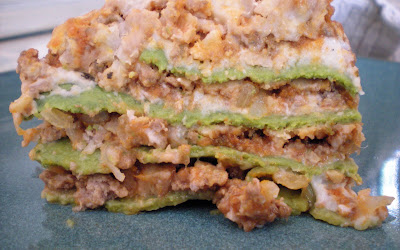 The March 2009 challenge is hosted by Mary of Beans and Caviar, Melinda of Melbourne Larder and Enza of Io Da Grande. They have chosen Lasagne of Emilia-Romagna from The Splendid Table by Lynne Rossetto Kasper as the challenge.
This was a delicious lasagne! I Highly recommend this recipe...Not much to say about it...I would recommend not using all the meats that it calls for. I had to do the meat sauce twice. The first time I did it as the recipe called for..then I forgot to put it away that night..soooo...for the sake of food safety I tossed it...So I remade it with just normal meat and it was delicious!

This was definitely not one of my favorite challenges...but it was a good change of pace from all the desserts...
Posted by Becky and Megan at 10:37 PM No comments:

The February 2009 challenge is hosted by Wendy of WMPE's blog and Dharm of Dad ~ Baker & Chef.
We have chosen a Chocolate Valentino cake by Chef Wan; a Vanilla Ice Cream recipe from Dharm and a Vanilla Ice Cream recipe from Wendy as the challenge.
I was down in Santa Clara over the valentine's holiday, so my friend Jeana and I (being the single gals that we are) made a day of it. We went to Casa de Fruta, drank fruit wines, baked the challenge, made the ice cream, watched Fight Club, made sweet potatoe falafels, and beet ravioli! (both of those recipes can also be found on this blog just look under february)

1. Put chocolate and butter in a heatproof bowl and set over a pan of simmering water (the bottom of the bowl should not touch the water) and melt, stirring often.
2. While your chocolate butter mixture is cooling. Butter your pan and line with a parchment circle then butter the parchment.
3. Separate the egg yolks from the egg whites and put into two medium/large bowls.
4. Whip the egg whites in a medium/large grease free bowl until stiff peaks are formed (do not over-whip or the cake will be dry).
5. With the same beater beat the egg yolks together.
6. Add the egg yolks to the cooled chocolate.
7. Fold in 1/3 of the egg whites into the chocolate mixture and follow with remaining 2/3rds. Fold until no white remains without deflating the batter. {link of folding demonstration}
8. Pour batter into prepared pan, the batter should fill the pan 3/4 of the way full, and bake at 375F/190C
9. Bake for 25 minutes or until an instant read thermometer reads 140F/60C.
Note – If you do not have an instant read thermometer, the top of the cake will look similar to a brownie and a cake tester will appear wet.
10. Cool cake on a rack for 10 minutes then unmold.

Ingredients
1 Vanilla Pod (or substitute with vanilla extract)
300ml / ½ pint / 1 ¼ cups Semi Skimmed Milk – in the U.S. this is 2% fat (or use fresh full fat milk that is pasteurised and homogenised {as opposed to canned or powdered}). Dharm used whole milk.
4 large egg yolks
75g / 3oz / 6 tbsp caster sugar {superfine sugar can be achieved in a food processor or use regular granulated sugar}
5ml / 1 tsp corn flour {cornstarch}
300ml / ½ pint / 1 ¼ cups Double Cream (48% butter fat) {in the U.S. heavy cream is 37% fat)
{you can easily increase your cream's fat content by heating 1/4 cup of heavy cream with 3 Tbs of butter until melted - cool to room temperature and add to the heavy cream as soon as whisk marks appear in the cream, in a slow steady stream, with the mixer on low speed. Raise speed and continue whipping the cream) or use heavy cream the difference will be in the creaminess of the ice cream.

1. Using a small knife slit the vanilla pod lengthways. Pour the milk into a heavy based saucepan, add the vanilla pod and bring to the boil. Remove from heat and leave for 15 minutes to allow the flavours to infuse
Lift the vanilla pod up. Holding it over the pan, scrape the black seeds out of the pod with a small knife so that they fall back into the milk. SET the vanilla pod aside and bring the milk back to the boil.
2. Whisk the egg yolks, sugar and corn-flour in a bowl until the mixture is thick and foamy. 3. Gradually pour in the hot milk, whisking constantly. Return the mixture to the pan and cook over a gentle hear, stirring all the time
4. When the custard thickens and is smooth, pour it back into the bowl. Cool it then chill.
5. By Hand: Whip the cream until it has thickened but still falls from a spoon. Fold it into the custard and pour into a plastic tub or similar freeze-proof container. Freeze for 6 hours or until firm enough to scoop, beating it twice (during the freezing process – to get smoother ice cream or else the ice cream will be icy and coarse)
By Using and Ice Cream Maker: Stir the cream into the custard and churn the mixture until thick (follow instructions on your ice cream maker

My Notes:
So I followed both recipes very closely. For the Valentino cake, I used all semi-sweet chocolate because I do not like chocolate that is very very sweet (like cadbury milk chocolate)...This complemented the ice cream well, but next time I would use dark chocolate, for part if not all of the chocolate called for.
Posted by Becky and Megan at 3:25 PM 5 comments: 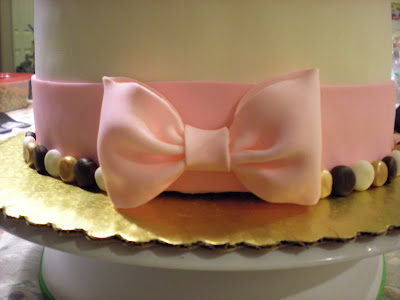 So I have no idea who "B" is, but I made her a cake..haha...Ok so here's the real story:
A girl who I went to highschool with recently contacted me and asked if I would do a cake for her friend, "B"'s, birthday...which of course i said "heck yeah!" to...I have a really hard time saying no to a cake...Anyways...She requested a red velvet cake. Never having made a red velvet cake before, I looked to my fellow bloggers. Thank goodness for Art of Dessert.
Here is her recipe:
Website: http://artofdessert.blogspot.com/2009/02/my-red-velvet-valentine.html
Recipe:
Red Velvet Cake
Allergy note: contains eggs, wheat and dairy
1 1/2 cups butter, softened to room temperature
2 1/4 cups sugar
3 large eggs
1 1/2 cups vanilla yogurt1 ounce red food coloring (liquid or gel)
1 1/2 tsp. vanilla extract
3 1/4 cups flour
3 Tbs. cocoa powder
2 tsp. baking powder
1 1/2 tsp. baking soda
3/4 tsp. salt
Preheat oven to 350 degrees F. Grease and flour two 8-inch or 9-inch cake pans or line three muffin pans with cupcake liners.In a large mixing bowl, cream butter and sugar till light and fluffy. Add eggs one at a time. Combine yogurt, red food coloring and vanilla extract in a small bowl. Sift together flour, cocoa powder, baking powder, baking soda and salt in another bowl. Alternate adding the yogurt mixture and flour mixture into the large bowl. Pour batter into prepared pans or lined muffin pans. Bake for 30-35 minutes (15-20 minutes for cupcakes) or until a toothpick inserted in the center of the cake comes out clean. Cool completely

Cream Cheese Frosting
Alllergy Note: contains dairy ingredients16 oz. (two 8 oz. bars) cream cheese, cold
1 cup butter (2 sticks), softened to room temperature
2 tsp vanilla extract
7 cups powdered sugar, measure then sift
With the mixer on a low speed, beat the cream cheese and butter till blended. Mix in vanilla extract. Slowly add the powdered sugar, a cup at a time. Once all the powdered sugar is added, increase to a higher speed to whip up the frosting till light and fluffy.
I followed both recipes almost completely. The only real change I made was I used Greek style vanilla yogurt for part of the yogurt, just to get a bit more of that "buttermilk" tang...who knows if it actually changed the taste at all 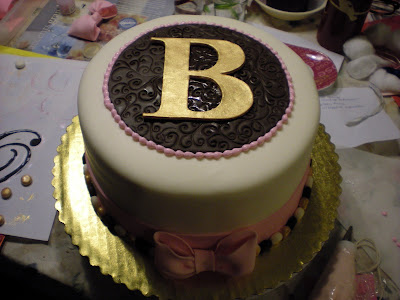 Also: Here are some shots of making the bows. I had never made very good fondant bows before so I went on Youtube and watched some videos of their tips. They suggested how to crimp the bows and to use cotton balls. I did it the first time and found that setting them on the table to dry made them to FLAT. So I used the cake ring to curve the bows and it worked great. I used extra cotton balls to support the bow while it dried. Also, the last shot is my new tool: iridescent Lustre dust!!! 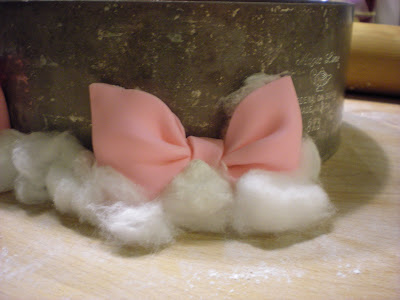 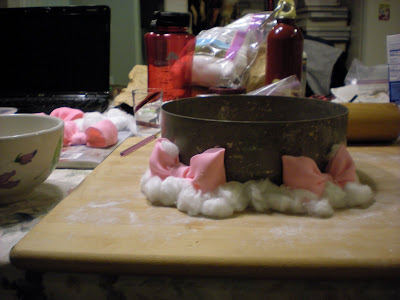 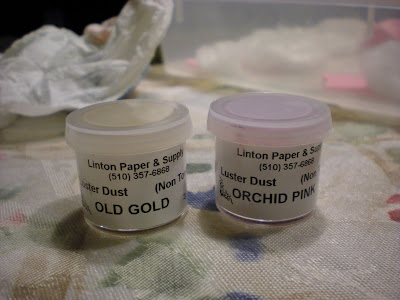 I am a proud member of :

Becky and Megan
Hi! We are a mother and daughter. Becky just got into cards, but has been quilting for quite some time. I LOVE cakes. Looking at them, making them, eating...love love love. This is our blog!